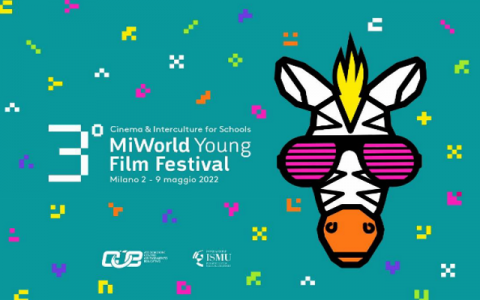 The MiWorld Young Film Festival (MiWY), a film festival for schools entirely dedicated to intercultural education and knowledge of societies and cultures from Africa, Asia and Latin America, makes its return again this year. The event, organised by the Coe Association in partnership with the Ismu Foundation and the Mohole School, will take place in person in Milan from 2 to 9 May for local schools and also online to involve students and teachers throughout Italy.

The event, now in its third year and organised within the framework of the 31st African, Asian and Latin American Film Festival, includes screenings and meetings and provides an important opportunity for exchange and comparison both for secondary school students - who have the opportunity to learn about and explore the cultures of Africa, Asia and Latin America through cinema - and for teachers interested in investigating the use of the cinema medium and audiovisuals in education.

Among the selected feature films are Neighbours, by Mano Khalil - a Kurdish-Swiss director who recounts with understated ease, through the curious and naive gaze of the young leading character, the fragile life on the Turkish-Syrian border in the early 1980s - and Children of the Mist, by Vietnamese director Diem Ha Le, a story of the encounter-clash between ancient customs and modern values in Hmong society in which tradition is set against education and change.

In the short film programme, on the other hand, we find, among others, two films from Morocco: Le départ, by Saïd Hamich, a story that effectively and simply outlines the familiar contours of migration; Qu'importe si les bêtes meurent, by Sofia Alaoui, a science fiction film that talks about the concept of faith in its broadest and most symbolic meaning. Also worth mentioning among the short films is the animated film On the surface, by Fan Sissoko, a letter from the director to her child on the issues of belonging and acceptance.

The selected films will be judged by three juries: the Students Jury, made up of seven students from secondary schools in Milan who will vote for the Little Zebra Prize for the best short film with an intercultural theme; the Teachers Jury, made up of twenty teachers from schools of all levels in Milan and its province who will award the Ismu - Big Zebra Prize to the feature film that best interprets educational values; the Popular Jury, made up of all the students who, after viewing, will express their preference by awarding the best feature film and the best short film.

The in-theatre screenings will be held on 4 and 5 May in the Auditorium San Fedele in Milan (via Hoepli 3b), while online attendance will be available on the Mymovies.it platform in the form indicated on the website www.miwy.org, on the dedicated page, which also contains all the general information for joining the festival and advance information on the programme. Participation in the screenings and meetings is subject to a fee with compulsory booking.

Other materials and news can be found on this site under the topic Intercultural Education, accessible from the "Topics" navigation menu.