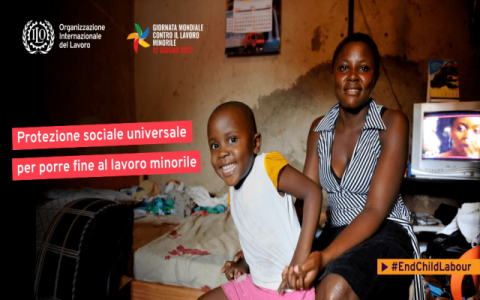 12 June marks the World Day against Child Labour, a phenomenon that comprises various forms of exploitation and abuse often caused by conditions of extreme poverty, lack of educational opportunities, and economic and political situations in which children's rights are not respected. A phenomenon of global dimensions that, according to data released by UNICEF, has increased to reach about one in ten children in the world.

"Social protection," reads the International Labour Organisation website, "is both a human right and a powerful policy tool to prevent families from resorting to child labour in times of crisis. However, in 2020 and before the crisis generated by the pandemic, only 46.9% of the world's population was actually covered by at least one social protection benefit. Coverage for children is even lower. Almost three quarters of children, or 1.5 billion, do not benefit from social protection."

World Day Against Child Labour 2022 takes place at the conclusion of the Fifth World Conference on the Elimination of Child Labour, held in Durban, South Africa, from 15 to 20 May. Ensuring universal access to social protection is an integral part of theDurban Call to Action, which was adopted at the conference. "Such a measure is essential to shape a world free of child labour and ensure universal social protection, as called for in the UN's Sustainable Development Goals 8.7 and 1.3 of the 2030 Agenda."

Available on the International Labour Organisation's website, on the dedicated page, is the recent report The Role of Social Protection in Eliminating Child Labour: Evidence and Implications for Policy, produced by the ILO and Unicef.

To mark the Day, institutions, associations and other entities promote meetings and other events, which take place all over the world.>

Among the initiatives carried out in Italy, Music for Rights, Peace and Education, a concert organised by the network of music-oriented schools of the Metropolitan City of Milan in collaboration with other companies, which will take place on 12 June in Milan (Villa Scheibler, via Felice Orsini 21). Information on the event is available on the website of the ILO Office for Italy and San Marino, on the page dedicated to the event, which also contains the text of the Durban Call to Action translated into Italian and other information.

Other materials and news can be found on this site under the topic Child Labour, accessible from the navigation menu "Topics."