Food security and nutrition in the world, UN report 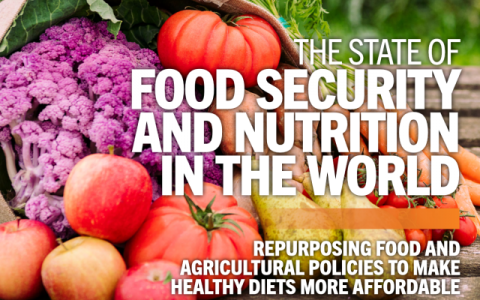 The number of hungry people in the world is growing, rising to 828 million in 2021. The recent report The State of Food Security and Nutrition in the World 2022  – by five United Nations agencies (FAO, Ifad, Wfp, UNICEF, WHO) - reveals that this is an increase of approximately 46 million people by 2020 and 150 million since the outbreak of the Covid-19 pandemic.

The report presents an update on the global food security and nutrition situation, including the latest estimates on the cost and accessibility of a healthy diet, providing new evidence of how the world is moving further away from its goal of ending hunger, food insecurity and malnutrition in all its forms by 2030. The publication also examines ways in which governments can rethink their current support for agriculture to reduce the cost of healthy diets, taking into account the limited public resources that exist in many parts of the world.

The data show that around 2.3 billion people (29.3%) were living in moderate or severe food insecurity in 2021, 350 million more than before the outbreak of the pandemic. Almost 924 million (11.7% of the world's population) faced severe levels of food insecurity, an increase of 207 million in two years.

According to estimates by the five UN agencies, some 45 million children under the age of five suffered from emaciation, the most deadly form of malnutrition, which increases the risk of death in the youngest children by up to 12 times. Furthermore, 149 million children under the age of five had developmental deficits due to a chronic lack of essential nutrients in their diet, while 39 million were overweight.

The report is available on the FAO website, in the dedicated news item.

Other materials and news can be found on this site under the themes Nutrition and Malnutrition in children, which can be reached from the "Topics" navigation menu.