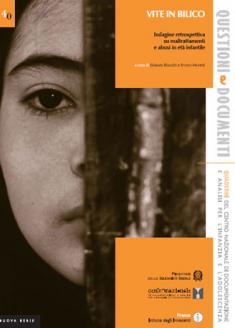 The study Percorsi di vita: dall’infanzia all’età adulta (Life paths: from childhood to adult age) was carried out in accordance with the 2003-2004 National Action Plan for the protection of the rights and development of children and adolescents. Indeed, the Plan stated that it was necessary to carry out a systematic “retrospective”study on the victims of sexual abuse.

The Quaderno 40 presents and discusses some of the main findings of the research. In a way, it summarizes all the existing knowledge on these issues, in particular on the short- and long-term effects of sexual abuse and maltreatment suffered as a child.

The work is also intended to promote the social recognition of the negative effects of violence: indeed, people all too often underestimate the role of an inadequate response of the social context, which increases suffering, anger and despair both in children and in adult victims, who are stigmatized or discredited.