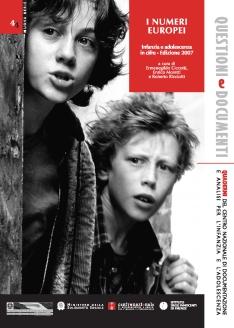 Europa has grown. The traditional 15 Member States were joined in 2004 by 10 countries of the Eastern Bloc and on 1 January 2007 by Bulgaria and Romania. But how do families and, above all, children and adolescents live in the EU countries? The fourth Quaderno on European data, the 2007 edition, marks the first time that this issue has been analysed with the involvement of all the 27 Member States of the European Union.

The volume contains maps, graphs and tables based on data coming from Eurostat, the United Nations, UNESCO, WHO, OECD (Organisation for Economic Co-operation and Development) and the European Monitoring Centre for Drugs and Drug Addiction.

The research covers fourteen thematic areas ranging from marriages and divorces to abortion, road accidents, tobacco use, alcohol and drugs; other topics of study are births, education, employment and data on suicides.