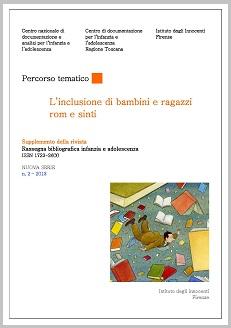 The new supplement to Rassegna bibliografica 2/2013 is dedicated to the reflection on the inclusion policies of Roma and Sinti children and young people in Italy. With a careful look at the existing literature, Luca Bravi, Lecturer at the Università Telematica "Leonardo da Vinci" in Chieti, guides the reader to become aware of the fact that there can be no real integration of the Roma population as long as the prejudices and stereotypes that are often held against this population, which is different in terms of culture, customs and habits, cannot be overcome. The path concludes with a description of the inclusion projects implemented in Italy today.

The filmography, by Marco Dalla Gassa and Fabrizio Colamartino, offers a viewing path that seeks to broaden the field of knowledge and do justice to the culture of the Roma and Sinti population. The themes addressed in the proposed feature films are those linked to the concrete existence of the Roma: the schooling of children and young people; the housing problem; the issue of relations with local authorities; the criminalisation of Roma behaviour and the ignorance of most people about their origins and culture.