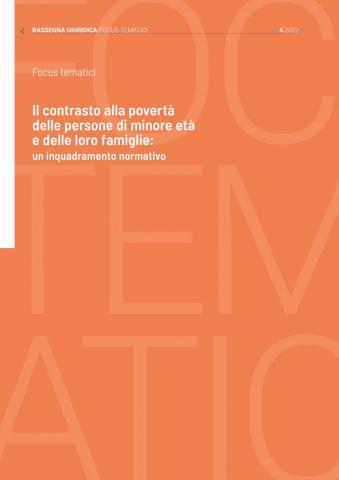 Fighting against poverty affecting children and their families: a legal framework

The problem of poverty and the social inequalities that it brings with it represents one of the most critical challenges of the contemporary age, affecting all areas of the world with different intensity and prevalence: from the least developed countries, which are undoubtedly the most severely affected, with very high rates of extreme poverty among the population, to the most developed countries where poverty is a phenomenon that is by no means eradicated, especially among the most fragile groups, including children, and inhabitants of the more remote and rural areas.

At international level, the fight against poverty remains at the top of the United Nations' political agenda and is still one of the greatest unresolved challenges. It is certainly no coincidence that the first objective of the 2030 Agenda for Sustainable Development, signed in September 2015 by the governments of the 193 UN member states, focuses specifically on the fight against poverty, understood as the priority challenge to be overcome, the starting point for a radical and comprehensive rethinking of development models, the essential condition for giving an increasingly large number of people the chance of a dignified life.

However, the Covid-19 pandemic is not the only factor that has contributed to the increase in extreme poverty rates threatening the achievement of Goal 1 of Agenda 2030. Climate change and armed conflict, not least the one that broke out in Ukraine, are also impacting heavily on the poverty rate, especially among children, raising development issues with respect to the existential prospects of children, boys and girls and, in a general sense, the future of the new generations.

The main European and national legislation on combating poverty among children and their families is attached.